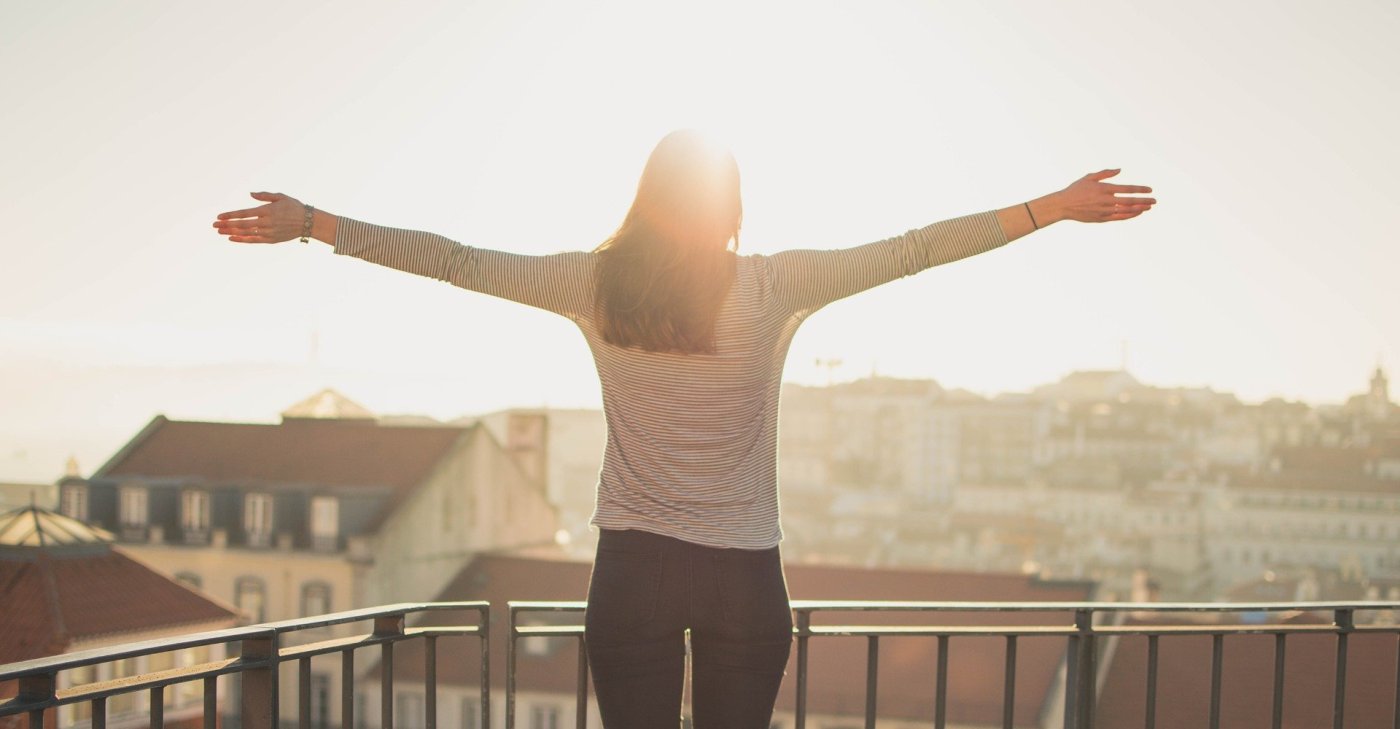 “Every day I would just wake up mad that I was still alive.”

Freedom Smith had been dating an abuser for five years. Things started out good — they had two daughters together, and when it was good, it was good. But when it was bad, it was real bad. Dangerously bad. She knew she had to leave — she just wasn’t sure how.

As a teenager, Freedom thought she was a Christian. She believed in God, but beyond being a generally good person, faith didn’t mean much more than that to her.

Freedom graduated from Paro Educational Center, an alternative high school in Burton, Michigan, after a history of tangling with a classmate. After graduation, she was on her own; her mom had 11 other kids to take care of, so Freedom, truly living up to her name, spent the next few years of adolescence on the road.

That’s when she became Harmony Divine, the “hype girl” for a cover band named Jynx. She’d run out on stage in outrageous costumes to get the crowd ready to rock. It was really fun, but the gig also provided vast experimentation with alcohol and drugs. Freedom knew the environment wasn’t a healthy one. So after a whirlwind four years touring all around the U.S., she went home to Michigan to find some stability.

Freedom landed a job at McDonald’s, where she met her best friend who helped her establish stability. She was on the right track, going back to church and reclaiming her faith.

The couple moved three hours away from Freedom’s family in Flint, Michigan; he strategically isolated her from everyone she knew and any safety she could find. They started a family and lived together for five and a half years, but he became abusive.

“I had two kids with him, and he treated me like garbage,” Freedom said.

Every day, Freedom woke up to anger. Anger for her situation, anger toward her abuser, and anger that she was even still alive. So she prayed.

“God, if you really exist and you are there, if you get me out of this relationship with him, I will become a Christian and start believing in you and teach my kids that there really is a God.”

While someone’s eternal security isn’t really a bargaining chip to God, He doesn’t often turn down opportunities to make Himself known.

“Two weeks, later he went to jail, and everything started falling into place,” Freedom said. “… I got away from him and never looked back.”

Freedom took her daughters where she knew they would be safe. But his jail stay didn’t last very long, and soon, he found them. This would happen several times in several places — sooner or later, he would show up.

“Every time he did find me, I’d just take off and run,” Freedom said. “I’d just drop everything and run, whatever we could carry.”

After stays in Michigan, Iowa, Nebraska, and South Carolina — where grown men jumped them and beat up her girls — Freedom felt desperate for help. They spent three and a half days on a bus bound for family in Michigan. But those family members couldn’t give her the help she needed. Freedom and her girls were officially homeless. That’s when she found The Refuge, a rotating homeless shelter in Lapeer, Michigan.

“Every fiber of my being was like, ‘no, not a shelter!’” Freedom said. “But we came anyway … I was terrified.”

The Refuge isn’t a traditional homeless shelter. It’s actually a rotating one, where area churches volunteer to feed and house guests for a week at a time through Michigan’s winter months. The Refuge team coordinates with area churches for transportation and takes care of welcoming guests.

She was terrified, but Freedom said being surrounded by Christian people really made the difference. They treated her family like they were wanted and not a burden — they weren’t used to that. Freedom said she felt like God was doing something.

“Coming to this shelter was probably the best thing that happened to us,” Freedom said. “I got to experience a lot of community, love that I didn’t know was available.”

It was that love and community that helped her not run when she saw her abuser from a distance. He has been in and out of jail for identity theft, drugs, alcohol, and domestic violence, but not long ago, he showed up in town. He didn’t see her, but it scared her enough that she went back to her apartment and started packing.

“But then I was like, ‘What am I doing? Everything’s fine, just calm down,’” Freedom said. “I have a large backing, a big community. People aren’t going to stand for him doing that. I don’t have to run.”

“I had to be at the worst place in my life that I could most possibly be,” Freedom said. “I’m not saying it takes that for everybody, but that’s what it took for me. I’m extremely thankful for everything that God has done for me.”

Freedom made good on her promise and is raising her daughters to know and love God. She goes to church and sees the power of prayer every single day. She volunteers at The Refuge, helping with the check-in process, something she was terrified of as a guest. Her experience as a former guest helps her love and serve current guests — because she knows what they’re going through.

“It was a really good thing that we came here,” Freedom said. “God has led me every place I’ve been to for specific reasons, to learn a specific thing, and I didn’t get that until after I’d been through this.”

Freedom doesn’t wake up mad anymore. She wakes up knowing God leads and protects her. She wakes up to give hope — and freedom — to the next Freedom she meets.

This story was originally published at Shattered Magazine on July 7, 2020.

4 thoughts on “You Can Find Freedom at The Refuge”